An avid SCUBA diver and amateur astronomer, I also love to hike, dance, and watch movies and TV. Despite what you might think from my initials, I am not a morning person and deeply resent my alarm clock. Currently, I live in Brooklyn with a husband, a daughter, and two cats. 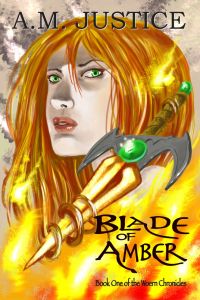 Passion destroys in Blade of Amber, Book One of the Woern Chronicles, an edgy fantasy sharpened with science fiction. Vic is a young woman who wants vengeance. Taken from her homeland and sold into slavery, she soon escapes and becomes the Blade, a soldier renowned for cunning and daring. She also wins the heart of Prince Ashel, a minstrel who prefers drinking and gambling to fulfilling his royal obligations. When Ashel is captured by soldiers of her former master, Vic sets out on a mission of rescue and revenge. Along the way, the Kragnashians—a mysterious insectoid species—give her the power of wizardry, and Vic realizes she is being forged into a weapon. The question is, by whom and for what purpose?

In the Woern Chronicles, author A.M. Justice shuffles motifs from high fantasy, fairy tales, and science fiction to forge a story about a smart woman and a charming prince who become ensnared in a decades-long conflict between nations. Wrongs, revenge, rescue, and redemption form the keystone elements of this series set in the distant future, on a planet far from Earth, where the descendants of marooned space travelers must contend with the indigenous people—sentient insects standing five meters tall—as they struggle among themselves for power and peace.

Praise for Blade of Amber:

5.0 out of 5 stars
Awesome epic fantasy touched with scifi.
Blade of Amber is riveting in its detail of new lands and cities experienced through strong characters.

5.0 out of 5 stars
An extraordinary reading experience.
From the very first page of Blade of Amber, I was transported into a magical world that I never wanted to leave. A.M. Justice’s writing…stole my heart with her emotional, adventurous and sympathetic characters.

5.0 out of 5 stars
Best fantasy I’ve read from a new author.
If I could give this book six stars I would. It’s a tightly plotted story, set in a rich, well realized world. Vic, the heroine, fights not only her enemies, but her own tortured psyche in a tale that goes far beyond the usual tropes of fantasy.

Love heals in A Wizard’s Lot, Book Two of The Woern Chronicles, a thrilling fantasy juiced with science fiction. Vic is a young woman with a wizard’s

power but no knowledge of how to use it. Ashel is the disgraced minstrel who loves her. They are separated when Vic is taken a thousand years into the past to face her destiny in a war with the Kragnashians, the indigenous civilization of Knownearth. While Vic fights to find a way home, Ashel becomes ensnared in a rebellion to secure the survival of humanity. Yet the one who may draw the lot that decides their future is Bethniel, Ashel’s sister and the heir to a hidden power. When her fate is revealed, will she save or doom the world?

Praise for A Wizard’s Lot:

5.0 out of 5 stars
Second book even better than the first., October 16, 2013
The richness and variety of the settings and characters were entrancing and the pace of the plot kept me glued in place. Perfect read!

5.0 out of 5 stars
A. M. Justice delivers again., October 1, 2013
Sequels so often disappoint. Not so with this wonderful follow up to Blade of Amber. A. M. Justice continues to weave a rich tapestry with complex threads that both satisfy the reader and leave one wanting more.

Where to Buy Them

2 comments on “AM Justice”