The Lord of the Rings trilogy is pretty awesome.  Game of Thrones, perhaps even better.  For fans of epic fantasy, these efforts represent the culmination of what we love about the genre, everything that pulls us in whenever we pick up a new novel or sit down to play Dungeons & Dragons with our friends — the drama, the politics, the darkness, the sense of danger and wonder and excitement and the discovery of worlds that can only exist in the imagination.

But not every effort to bring epic fantasy to the screen have been nearly so successful.  In fact, it’s safe to say that most of them were pretty awful…and yet we love them anyway.

It’s hard to say why epic fantasy translates so poorly to film, but it seems that much of what feels so sweeping and serious in the personalized experience of reading a novel comes across as a bit hokey when projected to the screen.  My theory (for what it’s worth) is that fantasy films make such an effort to have a broad appeal that they get mired in fantasy stereotypes instead of telling good fantasy stories, and as a result end up feeling hackneyed and cliche.  That, plus they’re often just cheesy as hell.

And that’s not to say these films aren’t enjoyable.  Hell, I’m a fan of every single one of these movies (and many more like them), but I would hesitate to call them good examples of fantasy…or even good cinema, for that matter, but there’s still a level of enjoyment to be culminated from watching these films.  Sometimes you’re just in the mood for fantasy, and you decide that maybe a 243rd consecutive viewing of Peter Jackson’s trilogy might be pushing it…

So, without further ado, here’s a quick rundown of some fantasy films that aren’t especially good…but they are fantasy, and still enjoyable in their own right even taking the cheese factor into account.  I’ll cover 3 movies now, and a few more the next time my number comes up for the Guild. 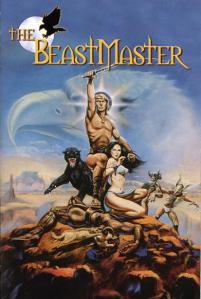 Despite the fact that it starred Marc Singer, Beastmaster actually had a few things going for it.  Sadly, the story wasn’t one of them: the young prince Dar (Singer) is intended to be sacrificed by the evil sorcerer Maax (Rip Torn, long before he started taking semi-respectable roles).  Dar is rescued by villagers and raised as their own, knowing that one day he’ll return and free his kingdom from Maax and the bestial soldiers of the Jun Horde.  Oh, and Dar can telepathically communicate with animals, because…well, because.

Corny as hell but surprisingly engaging, Beastmaster benefits from some well-staged battle sequences and a hammy performance by Torn.  Unfortunately the film is seeped with cheesy dialogue and could have benefited from a more original story, but it found tremendous appeal because the animals were so cool.  And for some reason Beastmaster spawned two sequels and a TV show, so apparently the filmmakers knew what they were doing…

Even George Lucas couldn’t quite get it right.  Fun and flashy but incredibly derivative and utterly predictable, Willow‘s title character is a Nelwin (who just happen to be identical to hobbits in almost every way) who becomes entrusted with the care of a young princess prophecy states will bring about the downfall of the evil Queen Bavmorda (Jean Marsh, sneering with aplomb).  Along the way Willow gains allies in renegade warrior Mad Martigan (Val Kilmer, excellent as always) and Bavmorda’s rebellious daughter Sorsha (Joanne Whalley), who race around with Willow from one action set piece to the next until the day is saved.

I’m not going to pretend like I didn’t enjoy Willow, but I’ve always accepted it for what it is: fluffy, throw-away entertainment, without much of an original idea to be found but still refreshing for its humorous dialogue (the movie is practically a self-parody at times), well-done action sequences and beautiful art direction. 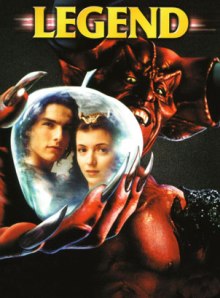 Jack (Tom Cruise) lives in the forest, where he occasionally flirts with young Lily (Mia Sara), an innocent maid.  One day Jack takes her to see a unicorn, unwittingly revealing the pure creature’s location to goblins in service to Lord Darkness (Tim Curry, looking nothing like Professor Frankenfurter).  Jack is soon appointed by the faeries of the forest to save the unicorn before it’s sacrificed, which would allow Darkness to reign supreme.

If that all sounds kind of silly…well, it is.  Thankfully, the director behind this silliness is Ridley Scott, whose arresting visual style and fabulous use of shadows and light can make even a largely nonsensical film like Legend an engaging treat.  There are some terrific special effects (the troll is awesome) and a few very well choreographed battles, but overall Legend comes across as a bunch of interesting ideas that never quite found a real story to go with them.

What cheesy fantasy movies do you hate to love?

Steven Montano watches too many movies, and there’s no question they’ve rotted his brain.  He also writes fantasy novels and likes to get lost in the woods.  Find out more at his website.