Okay, I have to admit it. I was hoping it wouldn’t come to this, but desperate times beget desperate measures. I accept 100% of the responsibility; I’ve been a bit behind over the past few weeks with the launch of the new book and a free promo on the old one. I wasn’t paying as close attention as I should have been. And so it was at 10:17pm on Wed., July 25, I noticed the blog post due to go up in precisely one hour and forty-four minutes wasn’t in the queue.

Normally, I’d just whip off a new, original post, but my day started at 6am and isn’t quite over yet. So I’m copping out and stealing an old post from my personal blog. If you’ve already read it, I apologize. If you haven’t seen it before…forget everything you just read.

Me looking shame-faced at my oversight

Making decisions is something most of us don’t relish. I’m not talking about the big decisions here — buying a house or car, getting married, moving, having children (not always a decision!) — I’m talking about the little things. We’ve all had this conversation while driving or walking along with our significant other:

“Where do you want to eat?”

“No. I chose the last restaurant. You pick.” 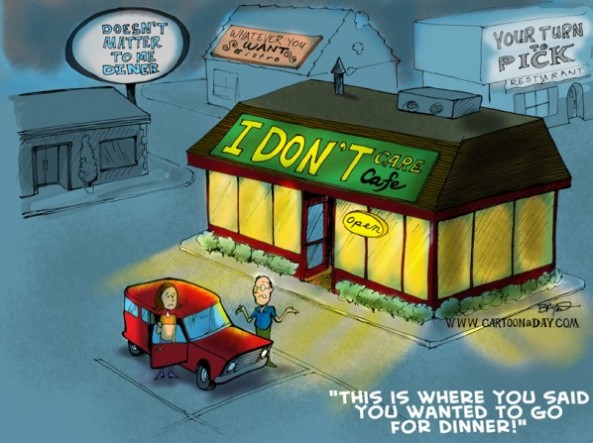 Sometimes a squabble ensues; often the decision ends up being the same old place you always go, or nowhere at all. But how much does that discussion change if one of you read a restaurant review in the local paper?

“Where do you want to eat?”

“I just read a review of this place, ‘Joe’s Eats’. The reviewer said it was good. Let’s try that.”

Much easier, right? You could substitute choosing a movie, going to see a band, or a host of other similar situations and the conversation remains essentially the same. The problem is that we don’t want to take responsiblity for a choice and end up disappointed. Then it’s our fault. But if the reviewer or a friend told you it was good, and it turns out they were wrong, you have someone else to blame.

In my family, we don’t have cable (by choice — there’s too much time-wasting, soul-destroying crap on TV) and we used to spend a lot of money renting DVDs every month (probably more than we would have spent on cable). When Netflix came along, we remedied that situation. How is that an example? Those of you who follow my blog will remember I am Canadian, and our version of Netflix has had some problems with different studios. While I can watch Thor or Transformers 3, I went looking for Blade Runner the other day and it wasn’t there. Given the lack of selection, we are left with one way to sort through the myriad of movies we often have never heard of: the star ratings. We don’t know who rated them, but that doesn’t matter. It gives us a guide as well as an out. If we start watching a movie and it’s crap, we can still say, ‘but it had a 4.5 star rating. It’s not my fault!’ (we tend to avoid most rated less than 4 stars). More often, we discover hidden gems we would otherwise never have known about because other people who watched and enjoyed took the time to make sure we knew it was worth it.

There are literally millions of books available through Amazon. Suzanne Collins, Stephen King, James Patterson, etc., have no problem finding readers, because the readers will go looking for them. But why, with all those books to choose from, would someone in Montreal, or Dallas, or Albuquerque, bother to buy a book by some guy named Bruce Blake (insert your name here, indie authors) who they’ve never heard of?

“Well, it’s urban fantasy, I like urban fantasy — that’s good. But it’s self-published, and the last self-published book I bought was crap. But it’s only $2.99, that’s not too bad. At least if it sucks, I didn’t waste too much money. ‘On Unfaithful Wings’? Interesting title. Kind of a cool looking cover. Geez, I’m not sure; I’ve already got so many books on my Kindle. I should just get it. No, I shouldn’t. Yes, I should. No, I– Oh wait, it’s rated 4.6 stars. That’s pretty good. Hmm. Oh, what the hell. I’ll take a chance.”

The moral of the story is, gentle readers, if you liked it, leave a review. Let others know how much you enjoyed it. I’m not talking about ‘The Hunger Games’ here — Ms. Collins already has almost 6000 reviews on Kindle (and a movie, which doesn’t hurt sales). I’m talking about myself and all the other independent authors out there who need your help: the ones you know and got their book as a favour (see? Canadian!), the ones you picked up free during a promo, the ones you bought (usually for $3.99 or less). Don’t be nervous — no one’s expecting Ernest Hemingway to write the review. If all you’ve got is “I liked the book. You should read it”, that’ll do. I would love to have that review.

And, if I may speak on behalf of independent authors everywhere: thank you from the bottom of my heart, not only for buying my book and taking the time out of your busy life to read it (who has time for reading when it takes so long to choose a restaurant?), but also for caring enough to let other people know how much you liked it.

2 comments on “With Apologies…Liked it? Review it!”